Parrotfish play an increasingly important role in the health and function of coral reefs and accompanying ecosystems. As human demands on the environment continually increase, protecting and conserving key organisms and ecosystems like the parrotfish is paramount to the survival of the coral reef and thus the general health of the planet.

Only covering 0.0025% of the oceanic floor, coral reefs produce half of all usable oxygen on earth, and absorb a third of atmospheric carbon, making them essential to sustain life on earth. Parrotfish act as one of the key stakeholders in ensuring this function is effectively maintained.

Parrotfish are a sub-family (Latin name “Scarinae”) of the wrasse family, varying in shape, color, size and sex during a single lifetime. Often colorful and vibrant, they can live up to seven years and grow between one to four feet in length. Born female and collectively live in harems, they can change their sex based upon the socio-environmental needs, ensuring a greater chance of reproduction and specie preservation. When sleeping, the parrotfish envelope themselves in nocturnal cocoons which is made from transparent mucous secreted from an organ on their heads – it is hypothesized that this masks their send from nocturnal predators such as moray eels. Ninety-five species of parrotfish have been identified globally, however due to their variability in appearance and lack of expert monitoring, their exact numbers are unknown.

Armed with sharp beaks and pulverizing grinding teeth located in their throats, they are expertly suited to break down and digest hard coral (which produces white sand as a biproduct); a characteristic of which is fundamental in their role to preserve and protect the health of coral. Parrotfish spend 90% of their active day cleaning the reef of algae and microalgae; algae who otherwise steal essential nutrients and photosynthetic energy from the coral. The symbiotic relationship between algae and coral is becoming increasingly unbalanced, thus making the role of the parrotfish even more vital. Due to changes in water nutrient composition caused by human pollutants, e.g. agricultural run-off and chemical dumping, algae have become over populous on coral reefs, growing at unnatural speeds (e.g. algae bloom), resulting in coral stress (bleaching) and eventually death. 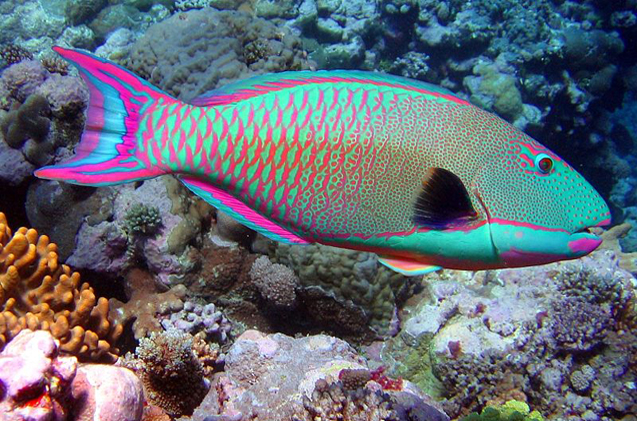 So what´s the issue? Parrotfish numbers are in decline. Human consumption remains the primary driver for the over-fishing of parrotfish, which is predominantly fished and eaten in the tropics. Known as ´Royal Food´ in Polynesia (historically consumed by people of royal blood only), they are considered a delicacy. According to the Caribbean Marine Biodiversity Program, over fishing of juvenile parrotfish in Dominican Republic and Haiti has been critical for many years. Over fishing disrupts the natural balance of the food chain, which indirectly affects the health and numbers of both the higher level predators such as groupers and sharks, and lower level pray.
To help maintain the health of reef, and as a result, maintain the balance of oxygen and carbon in our atmosphere to sustain both oceanic and life on land, we must preserve and protect such organisms like the Parrotfish.

So what’s being done? In July 2016, Sandals Resorts International committed to stop precuring or offering parrotfish on their menus (a previously popular dish) under the “Save the Parrotfish Campaign” in Jamaica. The following year, the Ministry of the Environment and Natural Resources of the Dominican Republic made history by declaring a two year fishing ban on all parrotfish species. In Haiti, the Protected Ares of Three Bays (PA3B) launched an educational program teaching the local communities on the importance of Parrotfish on the health of the reef and the island. Under Official Mexican Law 059, ten species of parrotfish are now protected in Mexico, which include; the stoplight, rainbow, blue, midnight, queen, princess, striped, red-band and the yellowtail.

Many independent conventions and conservation groups are continually backing the plea for species protection across the tropics, including the Cartagena Convention, United Nations Convention on the Law of the Sea, the Convention of Biological Diversity, the Tulum Declaration and many more.
Let us continue to firstly educate people on the importance of parrotfish, and campaign for stricter conservation laws and species protection – ensuring a greater quality of life both in our oceans and on land.