We are incredibly lucky to have resident populations of Tarpon in Xcalak Marine Park, but so many people have never seen or even heard about them, so here are some interesting facts…

LIFESPAN: Average lifespan of 50yrs, but the oldest animal is captivity lived up to 63!

CONSERVATION STATUS: The Atlantic Tarpons are listed on the ICUN list as vulnerable. Their numbers are in decline for many reasons including consumptive fisheries, habitat degradation and loss (especially to sexually immature individuals (0 to 9 years) and bycatch mortality. The substantial loss of habitat, large directed recreational fisheries throughout its range, and evidence of regional declines raise concerns regarding long-term population stability.

HABITAT & RANGE: Atlantic Tarpon are found on the western Atlantic coast from Virginia to Brazil, throughout the Caribbean and the coast of the Gulf of Mexico. Tarpons are also found along the eastern Atlantic coast from Senegal to South Angola. They are found in both saltwater and freshwater habitats, usually ascending rivers to access freshwater marshes. They can survive in brackish water, waters of varying pH, and habitats with low dissolved oxygen content due to their swim bladders, which they use primarily to breathe. They also have the ability to rise to the surface to take gulps of air, which gives them a short burst of energy. Their preferred habitats vary greatly with their developmental stages. In Xcalak Marine Park we tend to find them on specific dive sites that has a channel (usually with current). The Tarpon like to hang out together, just outside the current, in large numbers and it is very impressive to see them altogether. 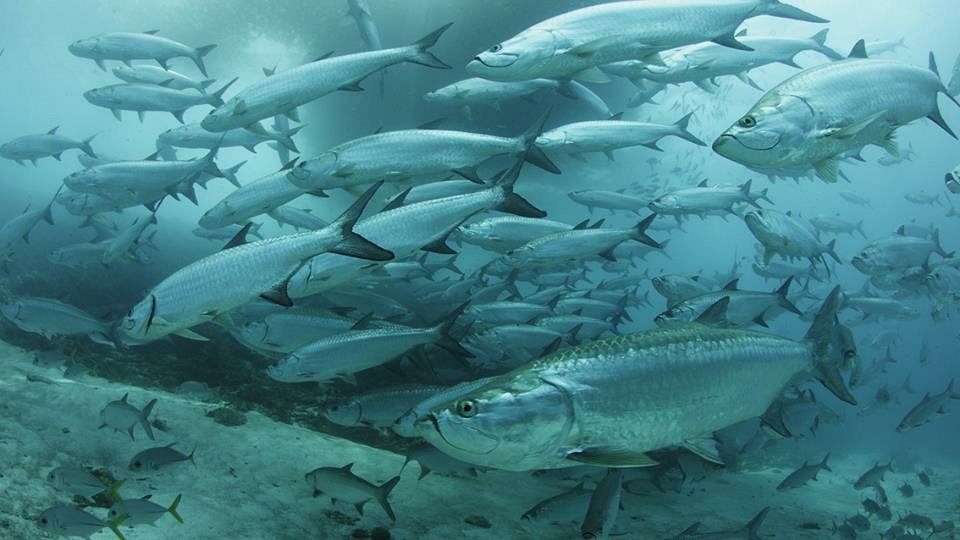 DIET: Stage-one developing tarpons do not forage for food, but instead absorb nutrients from seawater using integumentary absorption. Stage-two and -three juveniles feed primarily on zooplankton, but also feed on insects and small fish. As they progress in juvenile development, especially those developing in freshwater environments, their consumption of insects, fish, crabs, and grass shrimp increases. Adults are strictly carnivorous and feed on midwater prey; they swallow their food whole and hunt nocturnally.

BREEDING: Tarpons breed offshore in warm, isolated areas. Females have high fecundity and can lay up to 12 million eggs at once! They reach sexual maturity once they are about 75–125cm/30–50” in length. Spawning usually occurs in late spring to early summer.